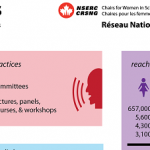 This event focuses on providing engineering and geoscience students with the tools for salary negotiation, and the opportunity to start building their industry contacts.  It allows students to meet and speak with professionals one-on-one in a casual setting and learn about the different career paths available to them. When:  Mar 3, 5:30 – 8:00 pm Where: […]

National Public Radio (NPR) reports on a new study by University of Texas sociologist Catherine Riegle-Crumb, which offers an interesting new perspective on this question. Riegle-Crumb found that across the US boys were more likely to take physics than girls, but at individual schools the divide was anything but constant.  When she controlled for variations, she […]

Are you interested in learning about potential careers in life sciences and biotech? Want to learn about up and coming scientific endeavours in BC from leading companies and exhibitors? Need to build your network with like-minded peers and industry professionals? Please join the Student Biotechnology Network at their Annual Biotech Expo and Conference: When: Feb […]

Outspoken in her beliefs that everyone should be equal, Dr. Margaret Fulton worked to make schooling accessible and diverse. The Globe and Mail’s obituary outlines Dr. Fulton’s career path from a one-room school in rural Manitoba to president of Halifax’s Mount Saint Vincent University. For her work, Dr. Fulton received 15 honorary degrees and was […]

The San Francisco Chronicle (free content) reports on how some universities and colleges, including the University of California, Berkeley, are taking steps to create more diversity in their computer science programs. “Berkeley put more emphasis on the impact and relevance of computing in the world, and added pair exercises. Each class begins with a discussion […]

BC WEN is Hiring a Project Coordinator

The BC WEN is undertaking a three-year project to develop a labour market strategy for women in the energy sector, with a focus on Northern BC. The project will create a baseline understanding for the current role women play in the industry in the region, barriers to employment, opportunities for training and skill development, and […]