You are browsing the archive for June 2011.

The Research: “Professors Woolley and Malone, along with Christopher Chabris, Sandy Pentland, and Nada Hashmi, gave subjects aged 18 to 60 standard intelligence tests and assigned them randomly to teams. Each team was asked to complete several tasks—including brainstorming, decision making, and visual puzzles—and to solve one complex problem. Teams were given intelligence scores based […] 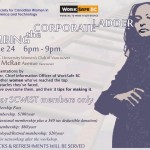 CanWIT BC Circle of Wisdom – Networking and Mentoring Series Event

You have a special opportunity to apply to participate in the Circle of Wisdom, “Raise The Bar” event. This is an evening of dialogue designed for CanWit members or interested members to come together in an intimate setting to connect with experience. Topic: Raising the Bar and Climbing the Ladder How to Reach Senior Director […]