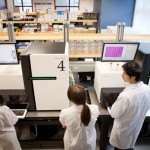 Monday-Tuesday, November 18-19, 2013 The Fairmont Palliser, Calgary, Alberta Don’t sit on the sidelines watching others scale to the top – Map out your own corporate climb by tapping the expertise and experience of those who’ve succeeded. The Canadian Institute’s Women’s Leadership Forum will offer strategies and solutions to help you secure workplace recognition and […] 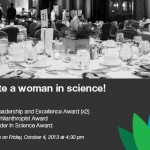 Do you know a woman working in the sciences whose work should be recognized? Nominate her for one of four Women In™ Science Awards, which will be presented at our annual Women In™ Luncheon on November 27, 2013. Women In™ is an annual event that recognizes and celebrates women working in non-traditional fields. Each year, we honour […]

When WISE NL was established in 1988, the situation for women was different and our attention was focused on increasing technical career awareness and removing systemic obstacles. Since then, much progress has been made.The number of women enrolled in post-secondary science and engineering programs has increased. Women are entering the technical workforce and taking on […]