This session will discuss the importance of innovation in economic development, the key role that STEM professionals play in innovation, and how enhancing diversity in the STEM professions may help to spur greater innovation. What:  CSChE workshop session at the 63rd Canadian Chemical Engineering Conference When:  1-5 pm, October 22 Where:  Garrison Room, Crown Plaza Hotel, […] 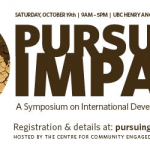